I already wrote a post about the difference between camel and elephant riding. So, you might have known that Vincent&I went for a camel ride.
At first I was a bit suspicious, I was afraid of how they treated the camels. Would it be good, or bad as the elephants in Thailand? Well, I can happily say that it was amazing. 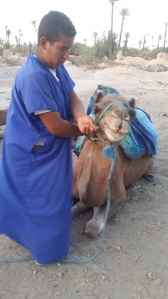 We went for the camel ride around sunset. The weather was great, and we had to wear blue suits like the man in the picture. It felt a bit weird to sit on the camel. But my camel (I called him Frankie) was real sweet. I could stroke him and he listened pretty well. We made a trip to the dessert; it was reallt special to do that on the back of a camel!

After 1 hour we stopped at a berber house, and a woman brought us tea. In French she told us that this house was from her and her family, who also owned the camels. Thetea was Maroccan tea: 4 spoons of sugar for just a little cup. You get used to it.
After the tea we went on the camels again; that was when 1 of the camels didn’t want to walk anymore.
After some beans (see picture above) he wanted to walk again. It was funny, he acted like a little child.
We saw the sunset and it was breathtaking.
If you ever go to Marocco, please to something like this.
But: check it first out, I did research and discovered this tour, were they were good to the camels. Be sure you book something like that.

As a vegan I really want that all animals are treated with love and care. So if I decide to do something that involves animals, I want to be really sure that they’re treated the right way.

Last summer I went to Thailand. T1he trip was amazing. I did a jungle tour, and informed about the elephant riding (which was included in the tour). I spoke several different people, and they all told me that the elephants were in no pain, and living a happy life. I believed them. Until I got there. Until I saw the elephants with my own eyes.
It was awful. It wasn’t a sanctuary like the people told me, not at all.
The elephants had burn marks, and they were beaten up with metal sticks.
So although I already paid for it, I made the decision not to do it.
It felt so wrong to support something like that.

I’m now in Marocco, and Vincent and I really wanted to ride camels.
But I was so afraid; where they treated right? Or harmed and broussed like the elephants in Thailand?  I asked the people from our hotel, and they said that wasn’t the case.
We decided to trust them.
It was a good decision.
It was amazing, and the camels were treated the right way!!
They weren’t slapping them, they were walking along a rope, and if they didn’t want to walk anymore, they didn’t push the camels. It was like they treated dogs; they were on a rope, and they gave commando’s to let the camels sit or stand. Sometimes they stroke them.
It was truly an amazing experience. I’m not saying that it’s this way everywhere in Maroc, but here it was. Always inform yourself.

Today I’ll be writing about something that has always inspired and also surprised me. The loyalty of animals. I believe they have the most pure hearts of us all. I grew up with a dog, and when he died (I was 12) we eventually got another one. His name is Diesel, and he is still alive. Diesel has a pure and simple soul, he loves us to the moon and back. His life is simple; he eats, sleeps,loves and goes for long walks. But above all; he’s happy. He is always there when I get home, when I’m sick he watches over me and he cheers me up when I’m down. The only thing he wants back is love and attention. We treat Diesel well, he is a member of our family. Unfortunately, that’s not always the case. Some people hit their animals,  or don’t pay enough attention to them. But will you ever see a dog run away? No. They are so loyal, and are always happy to see their caretakers, even if they slap them. They will never let you down. That’s something that will always fascinate me. I can say that I’m loyal to Diesel, just as he is to me. And in that way I try to treat him like a true member of our family. Because that’s what he is.

I want to mention my veganism one more time.
Because it’s so important, because otherwise it’ll be so cruel.
I know a lot of people, who say that they love animals.
That they care, and can’t stand animalcruelty.
But why aren’t they vegan then?!
Don’t they realise the horror they put on their plate?
I really think that they don’t know, or don’t want to know, what they eat.

I find it hard to realise what they eat, that they just don’t wamt to know what they eat.
They rather stay unknowing, then giving up their meat.
I’m happy that I don’t eat these beautiful pigglets anymore, and I don’t even see them as food anymore.
They are just creatures, like you and me.
Throughout the last months I’ve met a lot of ather vegans, who think the same way.
Im gratefull for that, although I wish there were more people who were vegan.
For the planet, for the animals.

Hey!
I know, my title is really weird. Well, so was my meeting with this little grasshopper yesterday. But it is a cute story.
Yesterday was a school day, so I went to school on my bike. While I was cycling, I found this little green friend. He was sitting on my bike. I thought I could protect him from falling off, till I was at school. Then I could bring him to some bushes. But, while I was cycling, he decided to go sit on my coat. 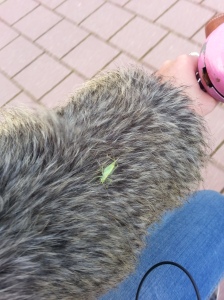 I arrived at school and couldn’t find my little friend, I thought he flew away. But when I arrived at my locker, I found him hanging in my hair! My classes already started so I gave him a spot in my locker..
And when I got back from classes, he was still there. I carried him home and set him free i the garden.
Everyone around me (I told some people about my grasshopper) thought it was weird, thought that I had to kill it. But why? It’s just another small, living creature. Why should I kill it for no reason?
It made me realize we’re not all the same. 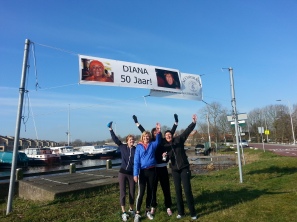 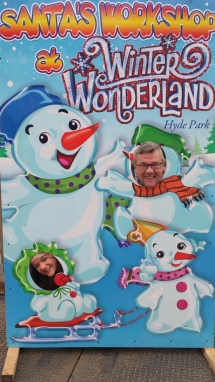 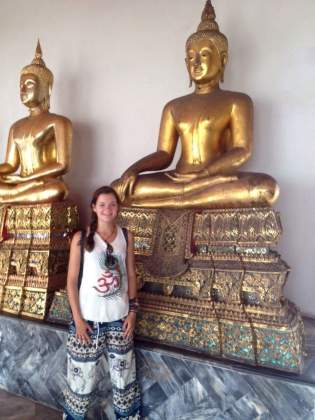